I grew up in Romania during some hard times. The communist era is long gone (I was a 6th grader when the revolution that freed the country happened) but memories of that period are still vivid in my mind. Some sound so incredible like scenes from a movie, not my life. Despite all the difficulties, people were still trying to make the most of it and enjoy life. One of the happiest times of the year was Christmas. We would decorate the Christmas tree, mom would cook a delicious traditional meal, we would eat oranges (the only time you would find them in stores) and wait for Santa. Kids would only get one present and that was the only time, besides birthdays, when they received toys.

Years later, when I moved to the US and had my first baby, I was grateful he could benefit from playing with so many interesting and colorful toys, especially created to help him discover the world. In time, our house was invaded by his and soon, his little brother’s toys and by the time my oldest turned two I knew I needed to start looking for toy alternatives.

I have been trying to limit my kids’ toys but despite my efforts it still feels like too much and I dread the idea of our home turning into a children’s museum because of the abundance of toys my boys own. Besides, once  kids go to bed I dream of a toy-free house but putting all those toys back where they belong is the last thing I want to do.

I decided to put an end to toy domination and started a little experiment about four months ago. One evening, after kids went to bed, I gathered all their toys, except for the big ones and some games, and boxed them. The plan was to take out one box per day. First day was for the box labeled “Trucks, Big Cars and Trains” as the kids hadn’t played with those in a while. I must say I was nervous. What will the boys say when they find all their toy bins empty? Nothing!!! They were so excited to discover their wheel toys that they couldn’t care less about the rest. I was surprised to see how quickly the boys adapted to the new rule and didn’t miss the rest of their toys. Since then I altered the rules to fit us better and now the kids are in charge of choosing what they want to play with and they can take out two boxes in case they each want to play with different toys.

This play with less toys experiment works well for our family and here are some of the benefits:

Kids don’t need tons of toys to play with and just because we can get them many doesn’t mean that we have to. A few toys is just enough. After all imagination is our kids’ most powerful tool that will help them turn anything into the most amazing toys ever.

This post is part of a series hosted by Encourage Play. Go check it out and see why play is the best way for children to learn. 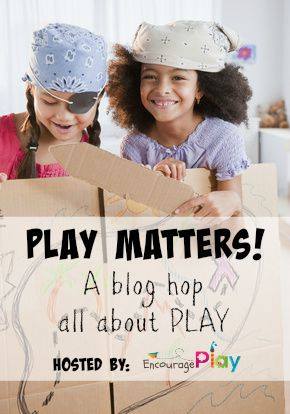 Great advice. Too many toys results in more "I'm Bored" comments than when we only put a few things out.

Thank you for linking this up at #made4kids! Our kids have way too many toys. I have always intended to rotate our kids' toys, but have never done a good job it.

Great post! Pinned and tweeted. You always bring the most amazing creations to our party. Thank you! I hope to see you again, this Monday at 7 pm. It wouldn’t be a party without you! Lou Lou Girls

Great plan! We have way too many toys and now that we've moved into a smaller house, we don't even have room for them all! I may have to try this! Thanks so much for sharing at Share The Wealth Sunday! xoxo Lisa

This is such a great idea! I need to do this with my kids because they do have way too many toys and my bedroom starts to look like a play room by the end of the day. Thank you so much for sharing and linking up with us over at the Welcome Home Wednesdays Link Party.