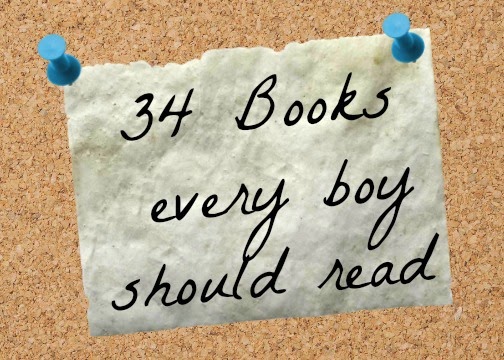 Based on the books recommended by Conn Iggulden and  Hal Iggulden in The Dangerous Book for Boys, this list is made up of classics of different genres like mystery, science fiction and adventure. These are stories that have enchanted us when we were young and will be good companions for our boys from an early age through adulthood. From Winnie-the-Pooh’s silly adventures with his friends to Sherlock Holmes’ crime solving cases, these books will always hold a fascination for boys.

1. Roald Dahl’s collection contains the author’s greatest hits that you can read to your boys as early as five. Start with Charlie and the Chocolate Factory, George’s Marvelous Medicine, The BFG, James and the Giant Peach and the Twists.

2. The Winnie-the-Pooh books by A.A. Milne will delight kids with its silly and beloved characters.

3. Follow Willard Price’s characters, two teenage boys Hal and Roger, who travel from Greenland to Africa and face great adventures while trying to collect pearls from the oyster-beds of a secret lagoon, track down the rare great white elephant , search for gorillas deep in the Congo jungle and more. Amazon Adventure, Underwater Adventure are some of the titles.

5. Fungus the Bogeyman by Raymond Briggs is the story of Fungus who lives an ordinary life in a strange underground world where slime, strong smells and dirt are very much appreciated. For age ten and above.

6. Grimm’s Fairy Tales, Hans Christian Anderson, Greek and Roman legends have enchanted our childhood and will do the same for our kids.

7. The Belgariad by David Eddings is a fantasy series of five books that combines adventure, humor and fun while telling the story of a simple farm boy who discovers he possesses extraordinary powers.

8. Rogue Male by Geoffrey Household is considered a classic of the thriller genre.

9. The Lion, the Witch and the Wardrobe by C.S. Lewis (first book of the Narnia series) is a classic tale that will introduce readers to a magical world.

10. Charlotte’s Webb by Charlotte S. Jaffe is such a wonderful story about the friendship between a pig and a spider.

11. Rudyard Kipling’s The Jungle Book is the story of a child lost in the jungle of India and raised by a family of wolves. While kids may be familiar with this story from the Disney movie, they may not have heard yet of Kim or Just So Stories.

12. The Thirty-Nine Steps by John Buchan is the first novel of an adventure series of five novels.

13. The James Bond books by Ian Fleming. Yes, the Bond movies are based on a series of 14 books.

14. The Harry Potter books by J.K. Rowling reveal the exciting story of a young wizard whose life and adventures fascinates kids and adults.

15. E. Hinton is one of the most popular writers of young adult literature. Start with her novel The Outsiders and move on to Tex and  Rumble Fish.

17. Isaac Asimov is considered a master of the science-fiction genre. His most famous work is the Foundation Series but the Galactic Empire series and the Robot series are also major series.

18. Terry Pratchett wrote and sold his first story when he was thirteen. His Discworld series includes over 40 books.

19. Ender’s Game by Orson Scott Card is a science-fiction novel highly appreciated by the genre lovers. It is the first book of the Ender Quintet.

21. Douglas Adams’s The Hitchhiker’s Guide to the Galaxy series is a science fiction classic.

22. David Gemmell is a bestselling author of heroic fantasy books. His most famous is Legend.

23. Magician: Apprentice by Raymond E. Feist is the story of a young man who studies to become a wizard.

24. The Lord of the Rings by J.R.R. Tolkien is a well-known trilogy of the science-fiction genre.

25. The Phantom Tollbooth by Norton Juster can be read at many levels.

26. George MacDonald Fraser is best known for his Flashman series of historical novels. The novels are presented as memoirs written by Harry Flashman, who remembers about his glory days as a hero of the British Army during the 19th  century.

27. Geroge Orwell’s prophetic 1984 and satirical Farm Animal are the author’s most famous books, both stories of the dangers of a totalitarian government.

28. Aldous Huxley imagines in his book Brave New World an ideal society placed in the future.

29. Lord of the Flies by William Golding is the story of a group of young boys cast away on an island is a classic.

30. G. Wells wrote about 100 books and his most famous are The Time Machine, The Island of Dr. Moreau, The Invisible Man and The War of the Worlds.

32. Gulliver’s Travels by Jonathan Swifts is another book that can be read at many levels.

33. Three Men in a Boat by Jerome K. Jerome. This well written, funny story of three friends’ holiday on a boat is on top 100 best-ever classic books.

34. Stephen King’s books are classics of the horror genre and can be quite scary. The Bachman Books are a good introduction to this genre.