I’m honored  to introduce to you a guest post written by Erin Buhr. She is a freelance writer, Early Childhood Educator and Mama to twin preschoolers. She currently lives in Mississippi where she enjoys spending time in the sun, reading good books, and traveling with her family. You can read more by Erin at Bambini Travel. 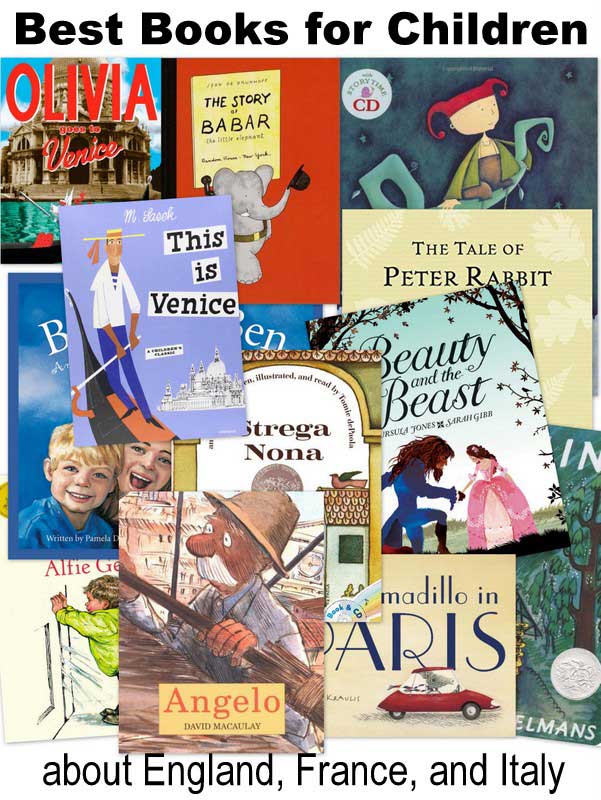 Travel and Children’s Books are two of my favorite things and there is not much that is more fun than combining the two. Our three year old twins are fascinated by geography right now, likely inspired by our Little Passports monthly packages, and I have been looking for ways to expand their enthusiasm. Stef’s delightful post about European Landmarks for Kids  is a wonderful hands on way to learn about landmarks in England, France, and Italy. The booklist below was built to compliment this post and an exploration of these three fascinating countries. It was surprisingly hard to find books about European countries. Similar to my yearly search for good books about Ireland and Irish culture, finding books about England, France, and Italy was not easy. I ended up finding a combination of books by authors native to the country, books that discussed landmarks in the country, and traditional fairy tales told in that country. 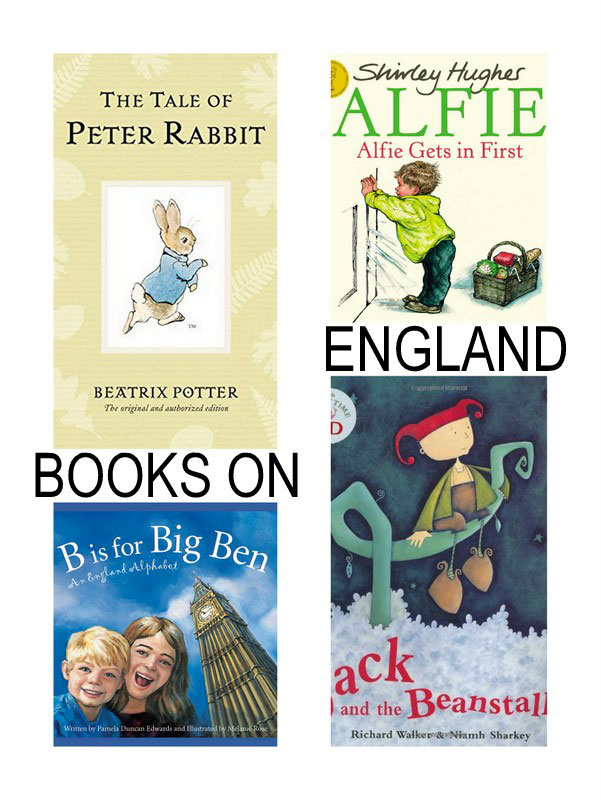 Shirley Hughes’ Alfie Series
I have written frequently about my great affection for Shirley Hughes’ collection of children’s books. Start with Alfie Gets in First and go from there. The Alfie series tell simple, relatable, joyful stories about a little boy, his sister Rosie and her family. The illustrations capture the messy, beautiful reality of life with perfect details. Shirley Hughes is an English treasure. 2+

Jack and the Beanstalk
Jack and the Beanstalk is a traditional English tale. There are countless versions of this story ranging from scary to serious to humorous. Many are delightful and this is just one of the many we have enjoyed. I picked this one because I adore the illustrations. There is a whimsy to them that seems magical to me. 3+

Peter Rabbit by Beatrix Potter
Peter Rabbit is beloved by children around the world and written by an English author. I believe their appreciation often comes from the way they identify with the mischievous Peter. If you don’t know the tale, Peter Rabbit is warned not to steal vegetables from the nearby farmer’s garden. Unable to stop himself though, he wanders in and soon finds himself in grave danger. Soft illustrations and just a touch of adventure, Peter Rabbit is a classic.  2+

B is for Big Ben: An England Alphabet by Pamela Duncan Edwards
Great introduction to England and English culture. I love that so many of England’s famous landmarks, like Big Ben and  Stonehenge are included along with a balanced mixture of history and current England. Cheerful illustrations and simple format make this book accessible for kids of a wide age range. 3+ 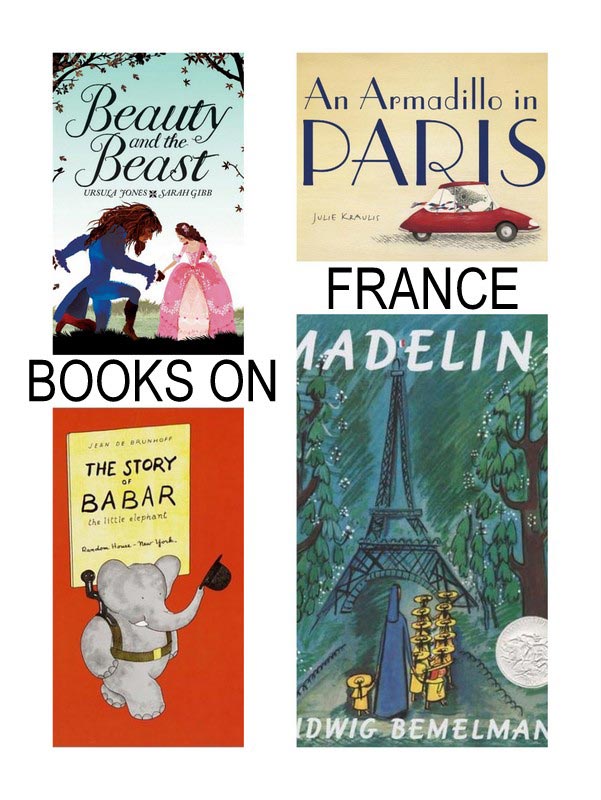 Madeline by Ludwig Bemelmans
Madeline, written by the French author Bemelmans, is another character adored by little boys and girls around the world. My twins adore her spunky antics and the rhythmic language of the entire Madeline collection. The book is further enhanced by the inclusion of various French landmarks painted in the backgrounds of Madeline’s adventures. 2+

Beauty and the Beast
This well-known and cherished tale is a traditional French fairy tale. Like most fairy tales, there are thousands of versions of this story. This version, illustrated by Sara Gibb, captured the imagination of my daughter with its bold, contrasting illustrations. Whichever version you prefer, learning to judge others for their character, rather than their appearance, is a universal lesson.  3+

Babar the Elephant by Jean de Brunhoff.
Quirky Babar the Elephant and his adventures are read by children across France and around the world. I believe it is the illustrations that draw children in with their bright colors and charming depiction of Babar. There is a whole series of stories about Babar that have been translated into English. 3+

An Armadillo in Paris by Julie Kraulis
“Arlo feels it. The twitch in his left claw. The twitch that only stops when adventure begins…” So begins the story of Arlo, the armadillo who loves adventure. His grandfather has left him journals about his many travels and inspired by the journal of Paris, Arlo takes off on an adventure. Part narration, part journal excerpts, and seen through the eyes of an inquisitive armadillo, this is certainly a unique perspective on Paris. Nonetheless, Kraulis is well versed in the delights of this fair city and her armadillo sees them all. His adventures throughout the city all leading him to his meeting with the impressive Eiffel Tower. Arlo is properly amazed and the reader is treated to some extra facts about the famed structure that had been creatively woven into the story. For instance, did you know that the Eiffel Tower is painted every seven years? An informative and inspiring trip through a famous city, sure to ignite your travel twitch. 3+ 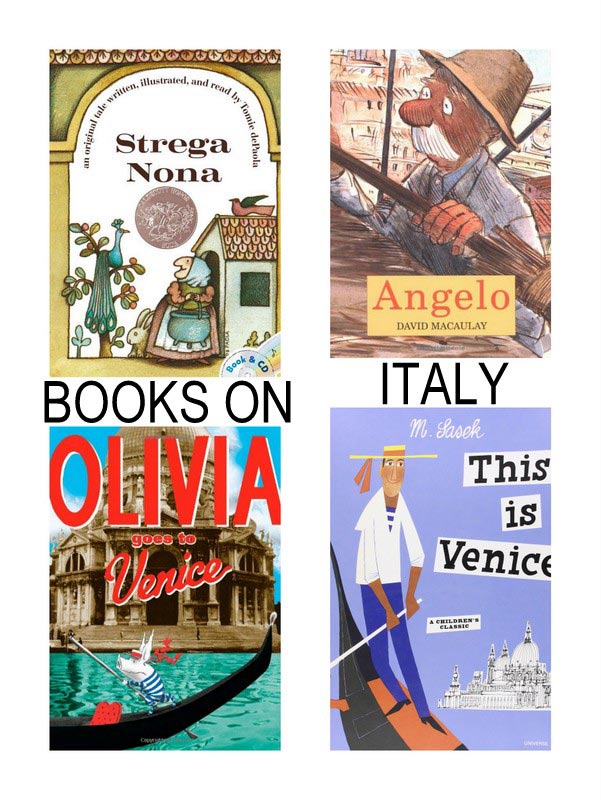 Olivia goes to Venice by Ian Falconer
Olivia fans will love this Italian flavored adventure. Olivia and her family go on a trip to Venice, Italy complete with gondola rides, sightseeing, and gelato eating. Falconer has creatively woven together pictures of Venice with drawings of pig tourists, to create illustrations that highlight all the most famous landmarks in Venice. Playful, informative, and full of Olivia’s spunk. 3+

Strega Nona series by Tomie dePaola
Tomie dePaola is American, but his famed character Strega Nona lives in historic Italy. His stories about her are stroked with Italian words and culture. They are playful, magical, and creative stories that capture the imagination and tickle the funny bone of young children. 3+

Angelo by David Macaulay
An old man, named Angelo, is restoring old Roman buildings when he meets a pigeon. Despite the fact that in his profession pigeons are generally disliked, he takes the sickly pigeon home with him and an unlikely friendship grows. Beautiful illustrations and story written by a British author that clearly has an appreciation for Italian architecture. 4+

This is Venice by Miroslav Sasek
This is another series of travel books for children. There are also This is Rome, This is Paris, and This is London among others. These are all updated versions of the original 1960s that are vibrant and charming. This is a fun way to acquaint yourself with some of Europe’s most famous cities.  5+